The use of WiFi in everyday life today cannot be separated from accessing the internet network. This technology is also more widely available. From homes to schools, offices, cafes, and shops.

WiFi is a wireless networking technology that enables wireless devices like laptops and cell phones to connect to the internet. We can easily access the internet using WiFi without having to connect the device via a cable.

Given the widespread use of WiFi today, this technology has a long history. A look back at the evolution of WiFi would be pointless if the original inventor was not mentioned. The following is a comprehensive history of WiFi development. Who would have thought that a popular Hollywood artist would discover this technology? Hedy Lamarr here. On November 9, 1914, Hedy Lamarr was born. He was born in Vienna, Austria, and he not only has a stunningly beautiful face but also a brilliant mind.

He discovered that he had a hobby of researching on the sidelines of his busy life as an artist. Being a well-known Hollywood artist benefits him in the field of research.

From here, he could socialize with notable figures such as John F. Kennedy and Howard Hughes. He obtained vital equipment from them in order to carry out the various experiments he conducted.

It turns out that, in addition to having a lovely face, this woman from Vienna, Austria, is also thought to have a brilliant mind.

This was demonstrated in 1942, when Hedy Lamarr managed to patent a product known as a secret communication system, which uses radio frequencies to exchange data.

The product is regarded as a very solid and significant foundation in communication technology.

He collaborated with avant-garde composer George Antheil to create his contribution to the history of WiFi.

This meeting prompted Lamarr to invite George to assist him in developing a tool to aid in synchronization. Antheil has extensive experience with synchronization of player pianos, or pianolas, from music projects.

Based on a frequency jump mechanism that switches between 88 different frequencies, the two were inspired to create a covert communication system for remote control of torpedoes.

They also received a patent for this system in 1942. This discovery was later given the name Frequency Hopping. However, the name has been changed to spread spectrum to reflect the same basic concept. 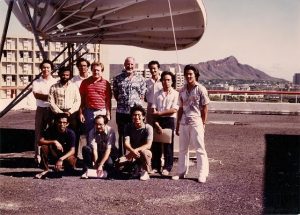 Hedy Lamarr's discovery became a significant discovery that was carried on in 1971. WiFi's development began with ALOHAnet, which connected the Hawaiian Islands with a UHF wireless packet network.
The ALOHAnet and ALOHA protocols were the forerunners to Ethernet and, later, the IEEE 802.11 protocol.
Vic Hayes is regarded as having played a significant role in the development of WiFi. He is widely regarded as the "Father of WiFi." When he joined NCR Corp in 1974, he began his research.
The predecessor to 802.11, intended for use in cash register systems, was invented in 1991 by NCR Corporation and AT&T Corporation. WaveLAN was the name given to the first wireless product. WiFi is said to have been invented by them.
The first version of the 802.11 protocol, which provides link speeds of up to 2 Mbit/s, was released in 1997. It was updated in 1999 with 802.11b, which allowed for a link speed of 11 Mbit/s and was widely adopted.

The WiFi Alliance was founded in 1999 as a trade association to protect the WiFi trademark. The brand consulting firm Interbrand coined the term "WiFi," which has been in commercial use since at least August 1999.
The WiFi Alliance has enlisted the help of Interbrand to create a name that is "a little more interesting than 'IEEE 802.11b Direct Sequence.'" According to Phil Belanger, a founding member of the Wi-Fi Alliance who led the selection of the name "WiFi," Interbrand created Wi-Fi as a pun on the word hi-fi.
The WiFi logo was also designed by Interbrand. The logo is simple and monochrome, similar to the "yin" and "yang" symbols.
WiFi's development has been quite rapid up to this point. The internet is also becoming increasingly important. WiFi, as a technology that many people require, plays an important role in lightening various jobs. Making the internet network connection especially smoother.
Next Post Previous Post
No Comment
Add Comment
comment url
Hardware